Film locations in Venice | The unique architecture and atmosphere of the world-famous Italian lagoon city not only attracts around 30 million tourists every year but has long since attracted film-makers from all over the world. In the past, the city of Venice has been the backdrop and setting for a good two dozen international film productions.

Among the best known and most successful works are certainly the already older film classics “Death in Venice” (Luchino Visconti, 1971) and “Don’t Look Now” (Nicolas Roeg, 1973).

Venice, the Bridge of Sighs – The scene of the love finale of the 1978 US American film romance ‘I Love You – Je t’aime‘ by George Roy Hill with the two youth actors Thelonious Bernard and Diane Lane in the leading roles. Laurence Olivier plays a supporting role. The original title of the film is ‘A little Romance‘.

Venetian film locations at a glance

Shakespeare and the Venetian charm

The special Venetian ambience as a picturesque interplay of water and land has, even before the cineastes, also inspired the creative imagination of authors, writers and writers. For example, the British theatre genius William Shakespeare had two of his plays performed between St. Mark’s Square and Rialto Bridge: The “Merchant of Venice” (1600) and “Tragedy of Othello, the Moor of Venice” (1603/4) have been part of the standard repertoire of renowned theatres around the world for centuries.

The numerous film adaptations of the two plays were and are no less enthusiastically received by the audience. The same applies to the many other cinemas and TV films and series since the early 1950s, in which Venice plays an unforgettable leading role alongside stars such as Katharine Hepburn, Donald Sutherland and Roger Moore, as well as Jean-Paul Belmondo, Harrison Ford and Angelina Jolie as the filming location.

Here you can see the main actor of James Bond, Daniel Craig with Michael J. Wilson, American film producer and scriptwriter, during the shooting of Casino Royale in Venice. The film was released in cinemas in 2006.

Those who still remember the showdown of Casino Royale with the falling front of a palazzo at the Canal Grande will, unfortunately, be disappointed. One sees a palace that does not even exist. The facade of the houses is located in the proximity of the Rialto Bridge. The red house, thus the second one from the left, was removed and trickily replaced by the collapsing and sinking palace.

This spectacular scene also deviates from the nature of the location, as the Canal Grande is only about two metres deep at its banks. Everything that takes place inside the palace was reproduced in the studio. 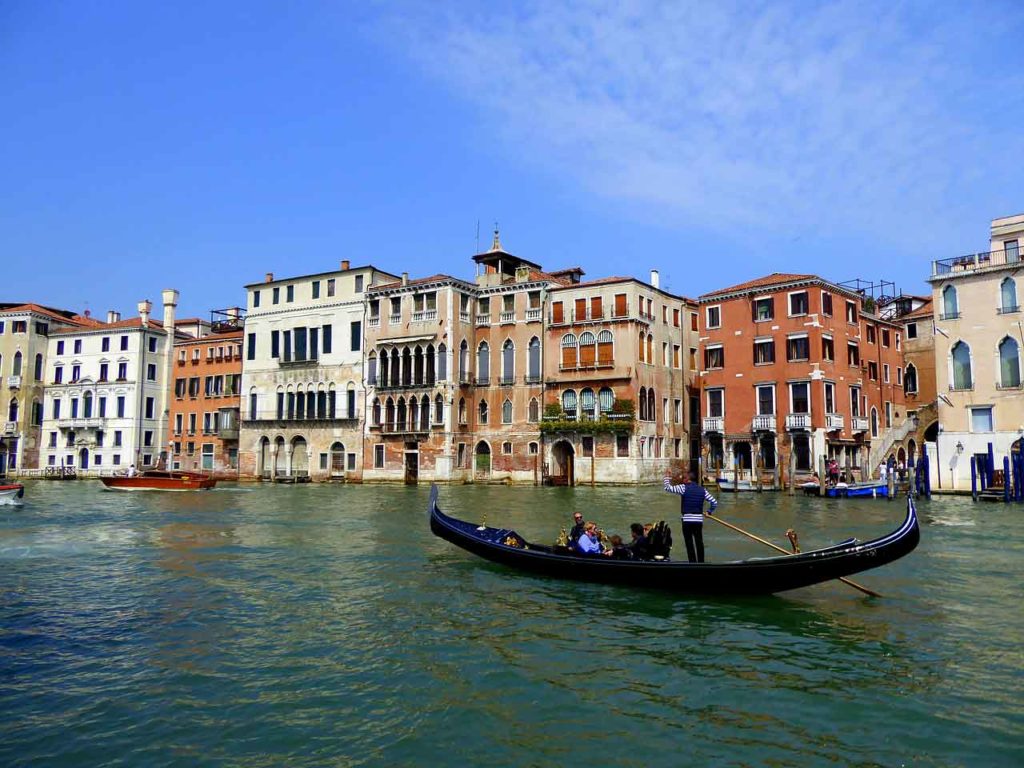 A US-American is an inventor and name giver of a German TV series. When in 1992 the novel debut of the US-American author Donna Leon, who at the time had been living in Venice for a good ten years, was published with the slightly morbid name “Death at La Fenice“, neither the author herself nor her readers probably had any idea that this would only be the prelude to 28 other books about the cases of “Commissario Brunetti” that have been published to date. In Germany, where the first book in the series was published in 1993 under the title “A Venetian Reckoning“, Donna Leon has since then been a bestselling author who has won several awards.

The great success of the detective novels, especially in Germany, finally inspired the Bavarian Broadcasting Corporation in 1999 to shoot the 90-minute film “Donna Leon – Vendetta” in Venice. The German actor Joachim Król shone in the role of Commissario Brunetti, who also impersonated the likeable character in the next three films “Venetian Charade”, “In Matters of Signora Brunetti” and “Nobiltà”. Since the fifth episode “Venetian Finale” (2003) and until today in 20 other films Uwe Kockisch plays the Venetian commissioner with a good feeling for crooked things and not too honest fellow men.

The episodes of “Donna Leon” (photo), which have been broadcast annually since then, with further cases of Commissario Brunetti, have found a large, stable and loyal regular audience, especially due to the casting of roles with other popular German actors such as Barbara Auer, Julia Jäger and Michael Degen as well as Karl Fischer, Patrick Diemling and Dietmar Mössmer. Even the German critics, who were sometimes somewhat sceptical about the dramaturgy and some of the plotlines, were and are largely in agreement about the positive assessment of the authenticity of the Venice location.

The skilful use of Venetian squares, streets and buildings in the series is credible and, according to many viewers, contributes significantly to its popularity. While the fans of Commissario Brunetti initially went on their own in search of the locations in Venice, there are now various guided tours of these locations.

Book online: Guided tour of Venice
on the tracks of Commissario

During the walks, visitors explore the north-eastern district of Castello, where the “Questura” (office) of the Commissioner is located, and the San Polo district south-west of the great loop of the Grand Canal, where Brunetti lives.

The facade of the ‘Questura’, i.e. the seat of the local police, is formed by the front of the ‘Palazzo della Nunziatura Apostolica’ at the Campo della Confraternita in Castello. Further outdoor shots in front of the headquarters took place around the neighbouring church ‘San Francesco della Vigna’ (photo above). The interior shots, on the other hand, were taken in the time-honoured hotel ‘Palazzo Stern’ at the Dorsoduro and Canal Grande not far from the Piazza San Marco and St. Mark’s Cathedral.

Those who want to experience everything very closely can of course also stay overnight in the ‘Palazzo Stern’. At the Campo Della Confraternità with its characteristic columns, there is also the landing stage at the canal for the “Questura”. Also in Castello, close to the Calle de la Madonna and the “Museo delle Icone”, is Brunetti’s favourite restaurant, the ‘Trattoria da Remigio‘ – Castello 3416 | Salizada dei Greci, Venice, also known for its excellent fish dishes.

In San Polo itself, however, there are two other restaurants where Brunetti is often seen. In the “Osteria Antico Dolo“, Ruga Rialto, 778, 30175 Venezia and “Cantina Do Mori”, S. Polo, 429, 30125 Venezia, the Commissary is often there to enjoy an “Ombra” (small glass) and “Cicchetti” (canapés). The ‘Arsenal’, the officers’ academy of the Italian Navy near the historical bridge “Ponte del Purgatorio” and the naval museum “Padiglione delle Navi” in Castello were also used for outdoor shots.

But by far not only German fans of Commissario Brunetti roam the city in search of locations, but cinema lovers of other colours can also quickly find familiar venues in Venice. Well-known from the film “The Tourist” (Florian Henckel von Donnersmarck, 2010) is, for example, the 5-star luxury hotel ‘Danieli’ in the magnificent 14th century Palazzo Dandolo in the Riva Degli Schiavoni north of the ferry terminal ‘S. Zaccaria’.

In the movie ‘Honig im Kopf’ (Til Schweiger, 2014) the main characters stay at the ‘Hotel Bauer‘ on the Piscina S. Moise. Further scenes were shot on the island of San Giorgio Maggiore (photo below). In the already mentioned spy thriller, ‘James Bond 007: Casino Royale’ (Martin Campbell, 2006) the Canale Grande is repeatedly staged in a big way during car chases.

Already in the film ‘James Bond 007 – Moonraker – Strictly Secret’ (Lewis Gilbert, 1979) the Piazza San Marco, a glass-blowing workshop in the Piazzetta dei Leoni, the Island of Murano, the ‘Galeria Ca’ Rezzonico’ in Dorsoduro, the already mentioned “Hotel Danieli” and the Torre dell’ Orologio served as backdrops. In “Inferno” (Ron Howard, 2016), St. Mark’s Basilica and the Grand Canal as well as the Doge’s Palace, the Bridge of Sighs and the Orseolo Basin are shown. The Canale Grande is also briefly shown in ‘Indiana Jones and the Last Crusade’ (Steven Spielberg, 1989).

Matt Damon as ‘The Talented Mr Ripley’ (Anthony Minghella, 1999) has appeared several times in St. Mark’s Square. Fast-paced rides through various Venetian channels are part of the plot in ‘The Italian Job – Hunt for Millions’ (Felix Gary Gray, 2003). In ‘Spider-Man: Far From Home’ (Jon Watts, 2019) the actor Tom Holland (“Peter Parker/Spider-Man”) rides in a boat on a channel. 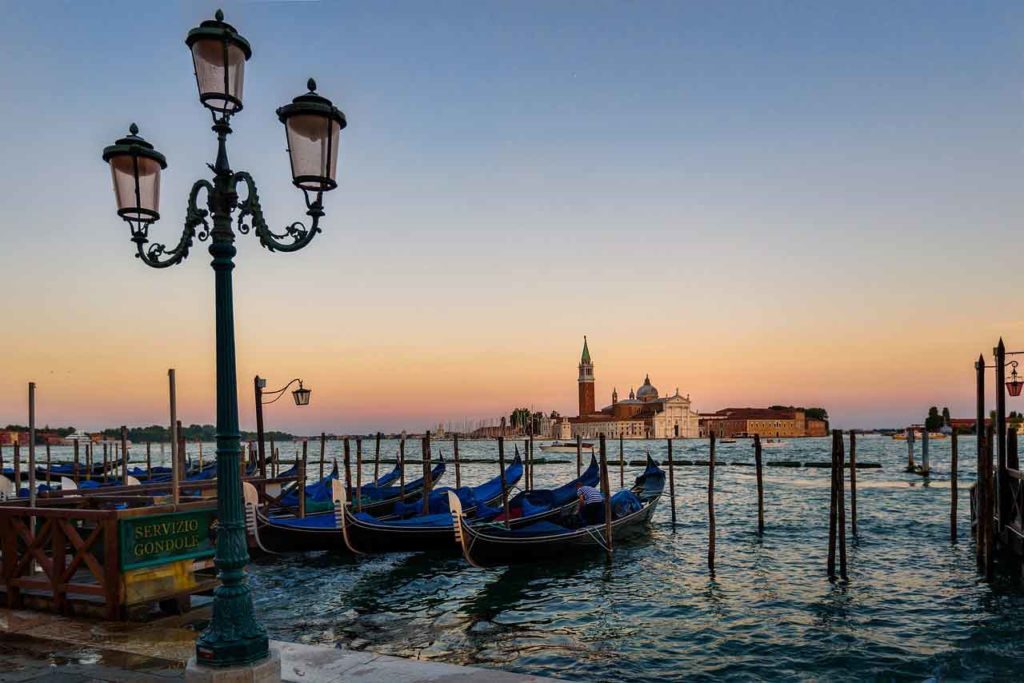 Thus, for film lovers, the capital of Veneto that is also occasionally called “the most serene” (La Serenissima) due to its beauty, offers a lot to see in any case. Meanwhile, many of the mentioned film locations are also listed in the respective film books and travel guides and therewith, they are easy and fast to find.

Especially those who are interested in places a little off the beaten tourist paths will get to know “Venezia” especially well under the aspect of the cinematic.

If you like it a bit exciting and want to get to know another Venice, you should be part of the tour of ghosts and legends, 2 hours also in Englisch. 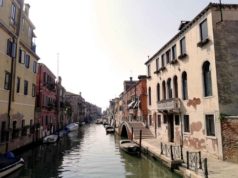 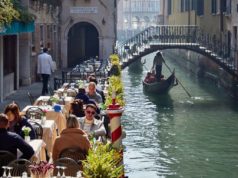 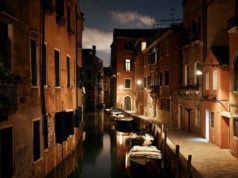