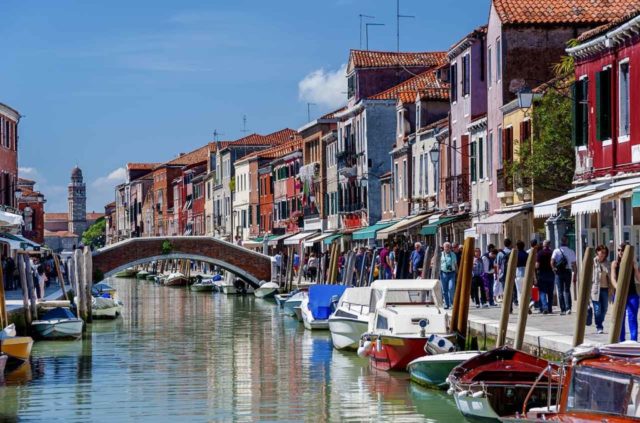 The three lagoon islands | In the lagoon of Venice is not only the famous city located but also numerous smaller islands, all of which have their own charm. The Venice lagoon has a total area of approximately 550 m², divided into the laguna morta in the north, which mainly consists of freshwater and slightly influenced by the tidal change, and the laguna viva in the south, which mainly consists of seawater and influenced by low and high tide. The islands of Murano, Burano, and Torcello are among the most favorite and beautiful places in the region.

Here is a short overview of the three remarkable and enchanting islands of the lagoon. The isles are a vehicle-free zone and a short trip from Venice is only possible by waterways. As an independent or organized trip is really worthwhile, there are therefore separate articles for each of the three islands of Murano, Burano, and Torcello including further descriptions, all information about directions and for romantics, a few tips for hotels. 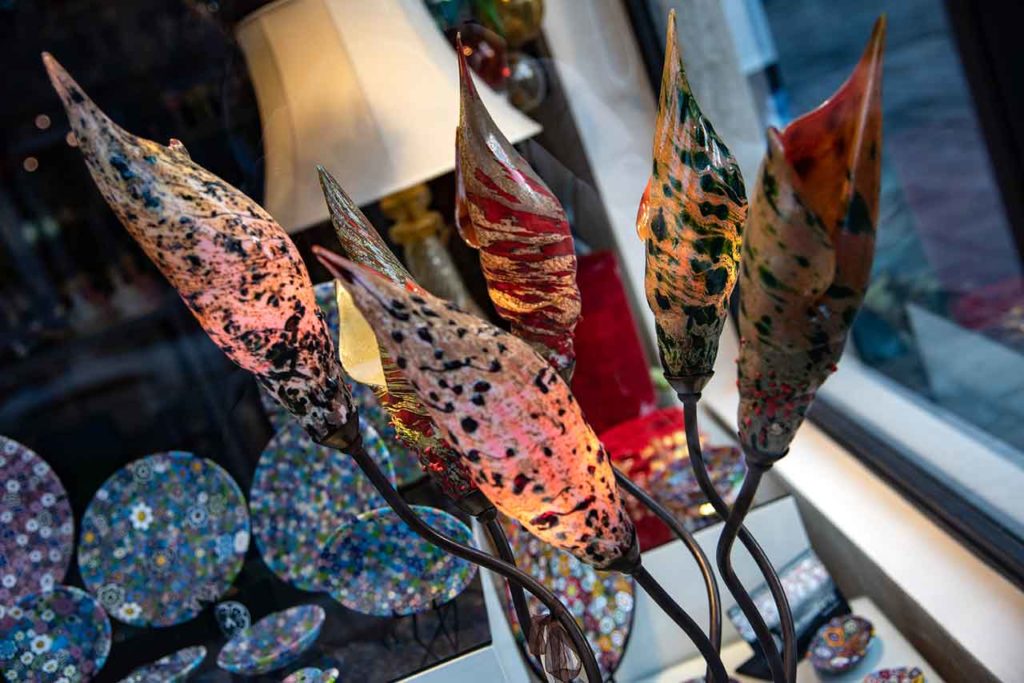 Murano is composed of seven small islands, located northeast of the old town of Venice and has around 6000 inhabitants. Its roots date back to late antiquity and still famous for its glass art. In order to protect the lucrative secret of glass making, Venice’s entire glass production was moved to Murano in the 13th century.

In the Museo Del Vetro, you can now retrace the thousand-year-old, turbulent history of Murano’s glass production using many preserved examples such as vases and mirrors. There are also many glass shops in the streets since Murano glass is extremely popular with collectors and tourists. If you want to know more, simply take part in a demonstration of glassblowing.

One of Murano’s greatest sights is the Basilica di Santi Maria e Donato. The magnificent 12th-century cathedral was knowingly or deliberately built right on the canal to impress guests and travelers and also offers inside through its colorful mosaic floor an impressive beauty. It is also one of the oldest buildings in the entire lagoon of Venice.

But the two other churches of the island are also worth seeing. In San Pietro Martire you will find the famous painting of “Doge Agostino Barberigo” by Giovanni Bellini and you can also admire two artistic altarpieces by Paolo Veronese. Santa Maria degli Angeli was founded by nuns in the Middle Age and is still used today for religious services, in spite of being a little off the tourist beaten track.

Last but not least, the Palazzo da Mula in the center of the island should not be skipped. This is a classic Venetian villa in late Gothic style with even a large preserved garden.

✅ Info: The island of Murano is the only stop of the 3 islands of the lagoon of Venice where the Hop-On Hop-Off boat trips moor at.

Burano – One of the most colorful places in the world 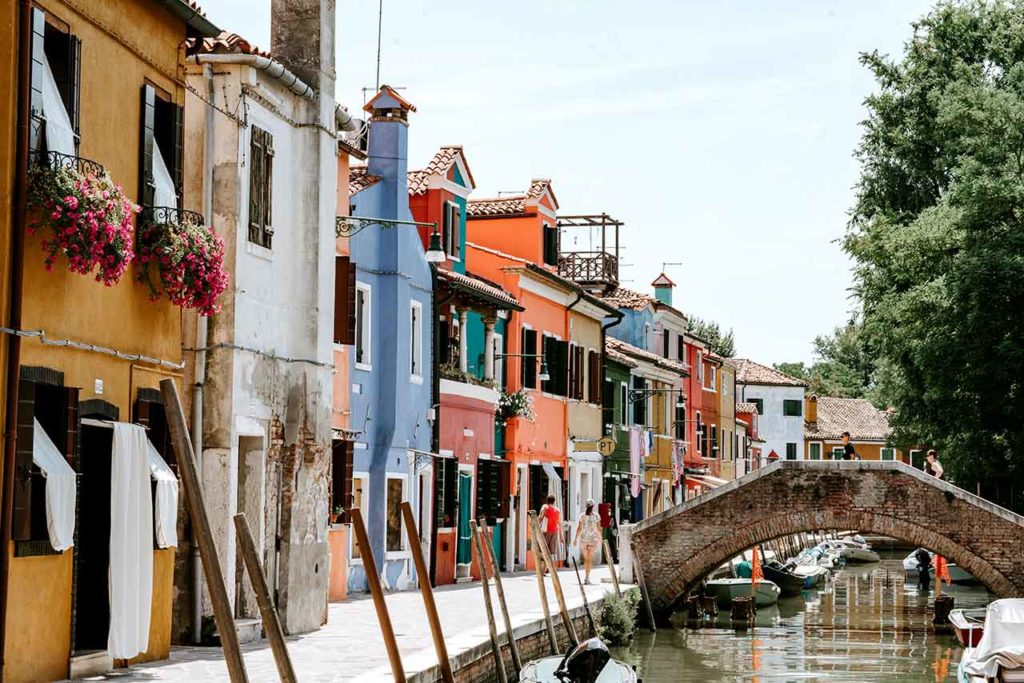 Burano is also situated in the northeast of the main island Venice. It consists of four islands which are all connected by eight bridges. With approximately 21 hectares and over 2700 inhabitants, it is one of the most densely populated areas of the lagoon. It was already populated in the 1st century B.C. and has since then been subject to a variable history. The Reticella needlepoint technique which the lace embroiderers produced was extremely sought after lace and became famous in the 18th century.

Nowadays Burano is for one reason one of the most popular and interesting islands in the whole lagoon: It is colorful. The houses on the island are predominantly maintained in bright mixed colors. Rarely does a house have the same color as the neighboring house and many of them have their own color patterns.

According to legends, there is a very simple reason for this splendid color: The individual color design of the individual houses should make it easier for fishermen to find their way home in the fog home after a night of heavy drinking. Whether this legend is true or not, Burano, with its extremely colorful, and individually painted houses, is definitely one of the most colorful places in the world. Here you will find the most picturesque canals and alleys in the entire lagoon.

Another small characteristic is the leaning tower of the San Martin Church. This tower rises above the colorful houses and can be seen from afar. In the beginning, it may have given the impression that is was about to fall over, but this leaning tower has long been a unique scenery of the island.

Trips to Murano and Burano 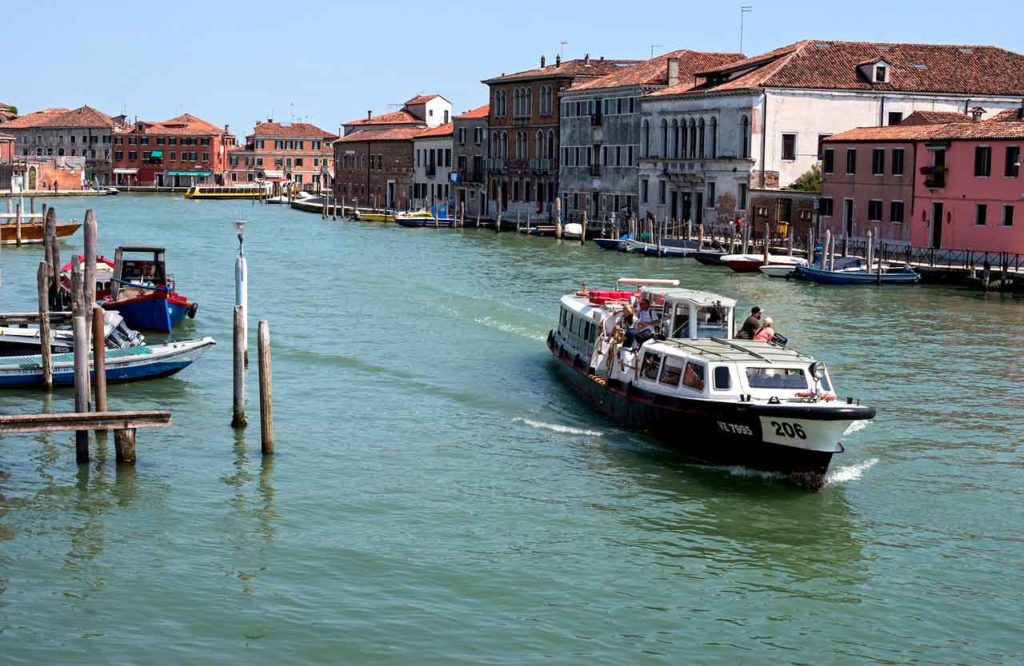 All islands can be reached by public transport. Further details can be found in the corresponding articles about Murano and Burano. If you want to experience more than just one of these beautiful places you will need a little more time.

There is much to marvel at in Venice and people who still want to see much of the impressive lagoon city should join one of the various boat tours that take about half a day and cost around about € 20, 00.

Here are a few recommendations for boat trips from Venice to Murano and Burano.

* The exact details about the meeting or departure point are on the provider’s website.

Torcello – The quiet, green island of glorious past 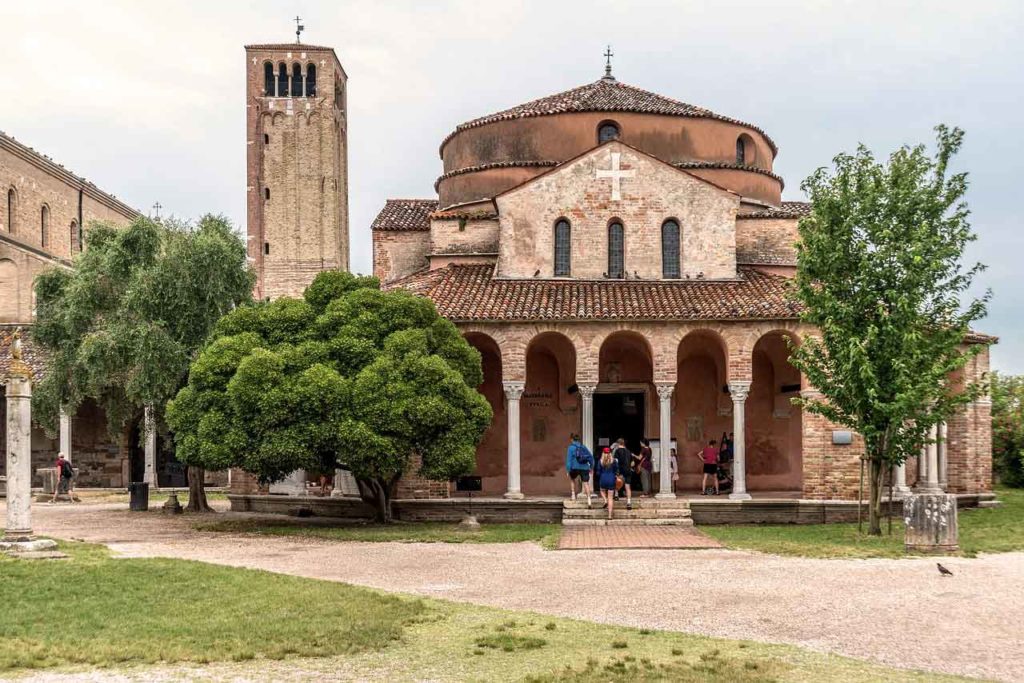 Torcello is located further north of Burano and is roundabout where the laguna morta begins. The tides are no longer noticeable here. Fittingly, it is almost uninhabited – only about 20 permanent residents live on the green island today. However, it once even exceeded Venice itself in size and wealth and was a bishopric with up to 20,000 inhabitants.

However, after the 12th century, the lagoon around Torcello sank so that its inhabitants had to leave it. Many buildings remained intact and still adorn the almost uninhabited and very green island. Correspondingly, although it is also popular among tourists, it is by far not as much visited as the other islands and is comparatively quiet.

Among the well-preserved buildings are mainly churches such as Santa Fosca and Santa Maria Assunta. The last one mentioned dates from 639 and is probably the oldest building in the lagoon. There are also some spread fragments, including some Palazzi.

The history of this island, which was once bigger than Venice and now has only a handful of inhabitants, can be traced back to the Museo Provinciale di Torcello. There are also two preserved Palazzi from the medieval heyday.

Almost in the middle, between the Santa Maria Assunta and the Vaporetto waterside mooring is the Devil’s Bridge, the Ponte del Diavolo. This small old bridge without railings crosses the Canal Maggiore. The bridge has its name because on Christmas Eve the devil is believed to sit there in the form of a black cat to take the soul of a deceased child.

Tours to Murano, Burano, and Torcello 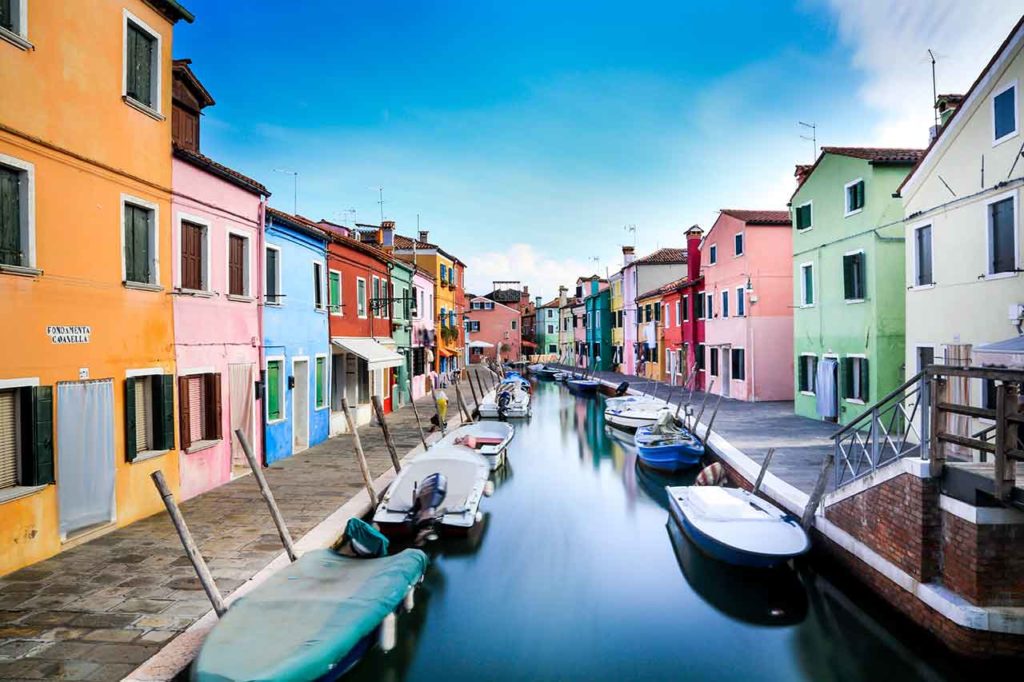 These boat tours include a short but worthwhile stay in Torcello. However, if you want to experience Torcello by yourself, you will find further important information you need for the journey to Torcello by public water bus.

* The exact details about the meeting or departure point are on the provider’s website.

** All prices mentioned in this article are subject to change. Discounts for children and teenagers are on the website of the respective provider. Unfortunately, these tours are not suitable for people with reduced mobility, especially for wheelchair users.

Especially during the warmer months, the demand for boat trips to the lagoon islands is enormous. The transport boats are not particularly large, therefore early booking is always suggested.

If you have a little more time, you can also explore the 3 islands in the lagoon with the hop-on hop-off boat tour. The boats dock regularly at all 3 islands. All important information on this is also available from the ticket provider.

It’s worth a visit

So each of these three islands is worthwhile. In Murano, you can admire the famous glass art and the as well as the impressive buildings. Burano, on the other hand, is a good place to stroll through the picturesque alleys and canals. Here you will find the typical flair of Venice in a very special way.

However, on Torcello, you have the rare opportunity to enjoy a little peace and quiet and to explore an almost uninhabited, green island with a glorious past. 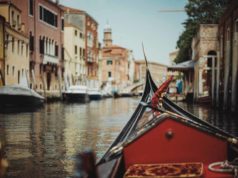 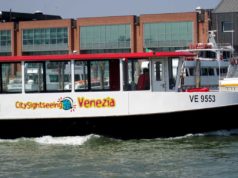