It is approximately eleven metres long, made of white marble and decorated with twenty masked heads: The Bridge of Sighs is one of the most famous of the 400 bridges that all cross Venice’s hundred canals. Anyone visiting La Serenissima must see the legendary landmark.

The importance of the Ponte dei Sospiri

The Bridge of Sighs was the direct link between the notorious lead chambers and the new prisons. After the accused had been tried in the courtrooms of the Doge’s Palace, they were taken to the dungeons or even to their place of execution amidst avoidably heart-rending sighs. Venice’s fine citizens were not confronted with the direct sight of the pitiful creatures, for the walls of the closed construction served as an effective screen. Moreover, the walls on the bridge were beautifully decorated, as can be seen on the one hand from the “straw bridge” Ponte della Paglia or on the other hand from the Ponte della Canonica.

Inside the Bridge of Sighs, two separate paths run to prevent eye contact between passers-by: One path for those not yet condemned and the second path for the delinquents who ended up in the dungeons or arrived in the part of the building added in 1589 where they were executed. They sighed in pain when they caught a last glimpse of the canal through the narrow peepholes.

Visit of the Bridge of Sighs 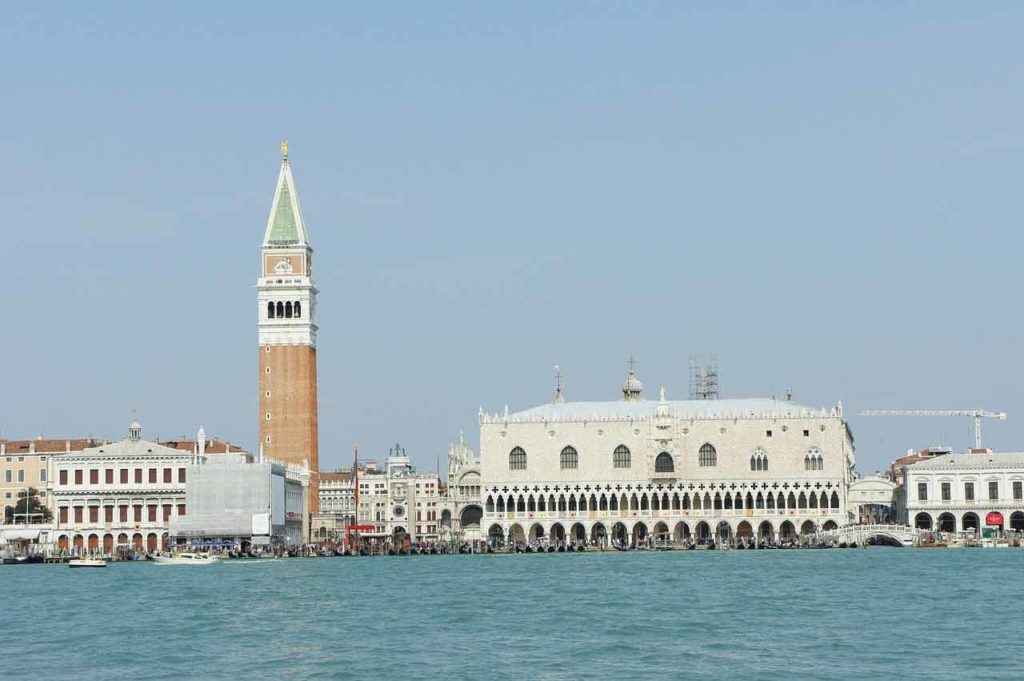 Visitors to Venice have the opportunity to view the Bridge of Sighs from the outside without paying an entrance fee. As already mentioned, either from the Ponte della Paglia (to the right of the Doge’s Palace), i.e. from St Mark’s Basin, or from the Ponte della Canonica. If you want to cross the bridge on foot and catch a glimpse of the outside through the barred windows, you have to visit the Doge’s Palace.

A visit to La Serenissima is not complete without a tour of the Bridge of Sighs. Visitors to the Doge’s Palace admire the imposing complex of buildings with courtyards and corridors, secret rooms and council chambers, and with the quite legendary secret itineraries Itinerari Segreti. You will see the rich furnishings of the building with paintings, bare marble floors and gilded wooden panels – an impressive splendour that clearly shows the wealth and great power of the Venetian Doges. You should allow a little over an hour, with or without a guided tour, for the stay in the Palazzo Ducale with crossing over the Baroque Bridge of Sighs into the Prigioni Nuove and back.

Opening hours of the bridge over the Rio di Palazzo

While you can of course admire and photograph the Bridge of Sighs from the outside at any time of day or night, crossing the bridge is only possible during the opening hours of the Doge’s Palace.

Waiting times at the Bridge of Sighs 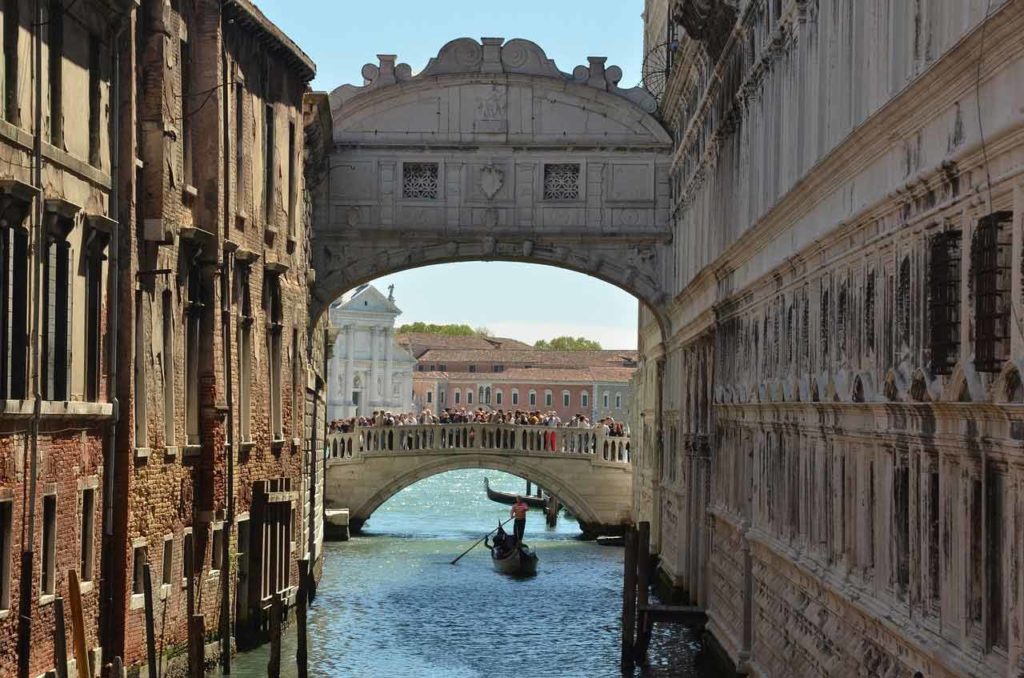 There are almost always waiting times to enter the Doge’s Palace to walk across the Bridge of Sighs. However, this only applies to visitors who have not purchased online tickets in advance. Those who are in a hurry and just want to take the obligatory photo from a distance have to find their way through the crowds on the constantly crowded Ponte della Paglia.

From the other side you can also see the Bridge of Sighs, as already mentioned. It is much quieter here, but the view from the Ponte della Canonica is rather less spectacular.

The architecture of the bridge

The baroque bridge is eleven metres long and quite narrow, made of Istrian marble – a limestone that comes from the quarry in Vrsar. Even the Romans operated the quarry because the marble quarried was of very high quality. With its beautiful shine, the Bridge of Sighs also has a special attitude, which is not at all matched by its spartan interior.

The bridge was planned by Antonio Contin, one of the grandsons of Antonio da Ponte, who went down in Venice’s history as the builder of the Rialto Bridge. The planning of the canal crossing had begun in 1600, and between 1602 and 1603 the bridge was built in the style of baroque architecture.

The famous bridge at night! 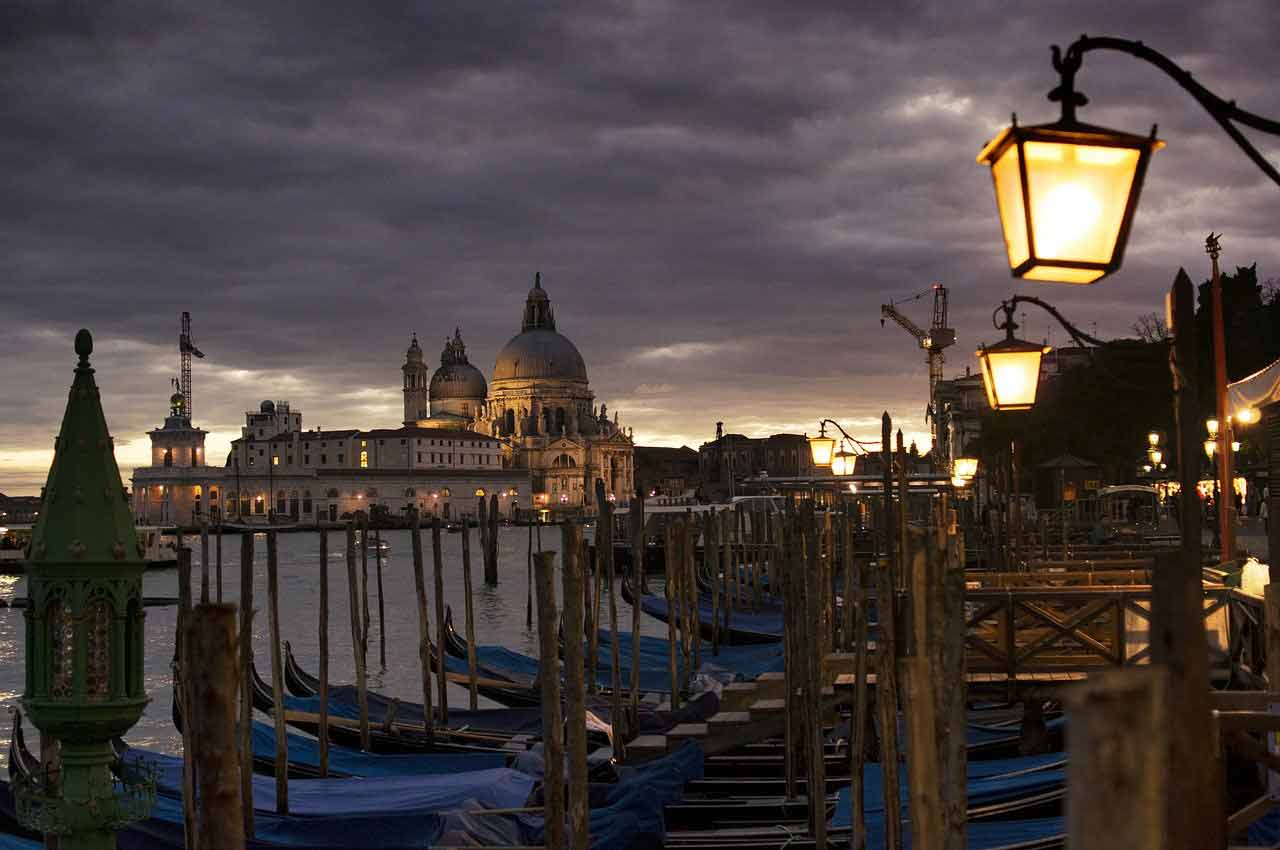 Not very spectacular! Romantics prefer to stroll through the almost deserted St Mark’s Square in the evening. But it’s not far to the Ponte dei Sospiri, and if you want to, you can take a look at the famous bridge in the dark. The view from the Ponte Paglia, however, is probably more memorable for the gondolas splashing in the water in front of the Piazzetta. Nevertheless, a gondola ride at night to the Bridge of Sighs remains spectacular!

The history of the Ponte dei Sospiri

Under the leadership of its powerful Doges, Venice became a wealthy great power. Not only did the Venetians control the entire Mediterranean region, they were also able to stage themselves in a triumphant manner in art and culture. However, anyone who violated the extremely strict rules of the maritime republic was sent to prison after a short trial over the Bridge of Sighs. Only Giacomo Casanova managed to escape from the Ponte dei Sospiri. More about this later.

The Bridge of Sighs over the approximately eight-metre-wide Rio de Palazzo canal was built between 1602 and 1603 – but it was only given its name during the Romantic period in the 19th century, when the painful suffering of the prisoners on their way to the dungeons was imagined. Yet the famous lead chambers directly under the roof of the Palazzo Ducale on the Piazza San Marco were far less horrible than was long assumed – which is why the felons initially ended up directly in the Pozzi, the musty dungeons in the basement of the Doge’s Palace. The narrow, damp dungeons were later supplemented by the new prisons on the opposite side of the canal.

The most famous prisoner

The most notable prisoner who crossed the Bridge of Sighs was none other than the famous womaniser Casanova. He had been born in Venice in 1725. In the course of his turbulent life, he ended up in the lead chambers of the Doge’s Palace, accused of blasphemy and sorcery. Before that, the judges of the Maritime Republic had sentenced him to imprisonment and had him taken directly across the Bridge of Sighs to the new Prigioni Nueve prisons.

He was arrested in 1755 and fifteen months later managed to escape from the lead chambers of Venice. However, many background facts about this time are unclear. If you want to know more about what happened back then, you should take the following tour:

❌ Note: The tour is not suitable for persons with reduced mobility. 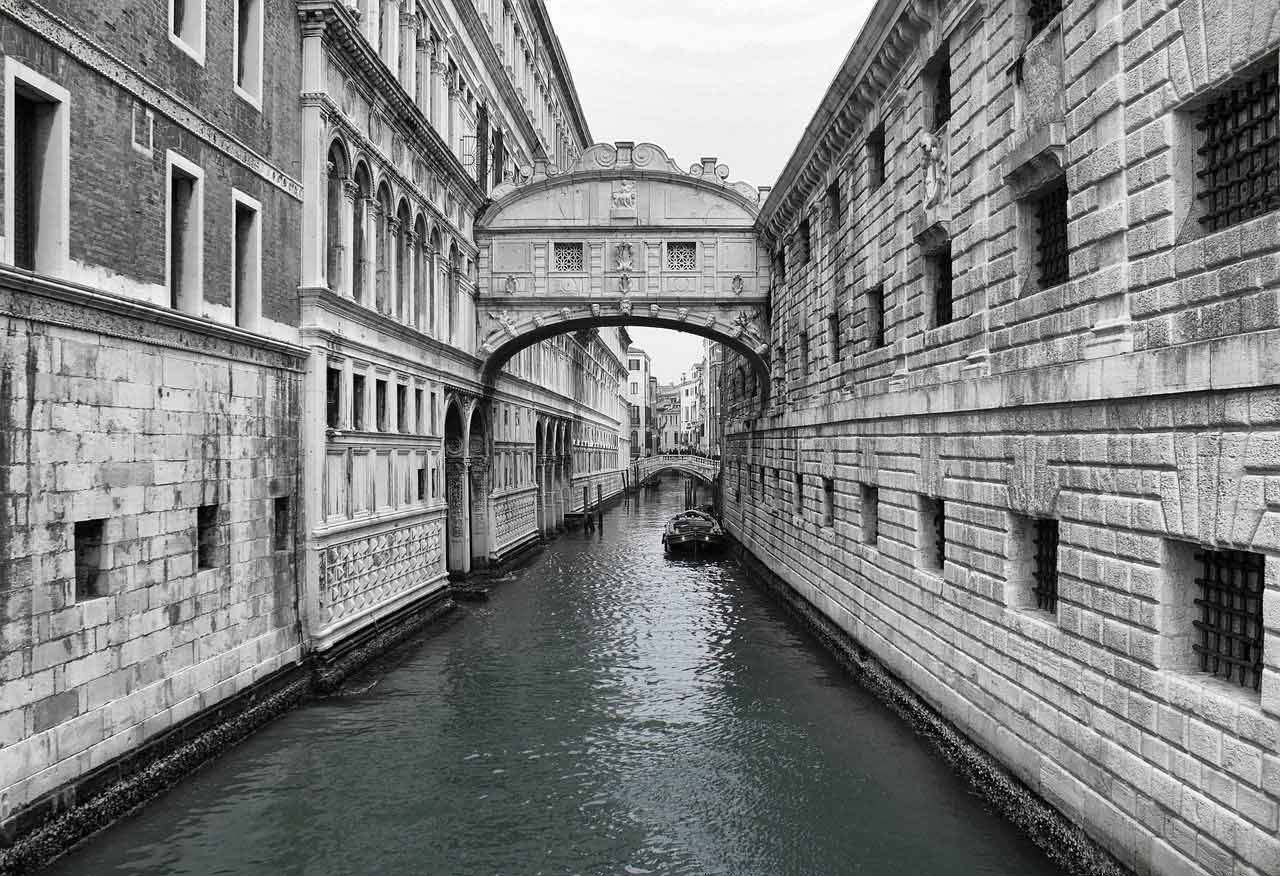 After the Rialto Bridge, the Ponte dei Sospiri is certainly the most photographed bridge in Venice. The Bridge of Sighs spans a canal that is only eight meters wide. The typical photo is from the Ponte della Paglia. On the left the Doge’s Palace, on the right the New Prison and in the middle the bridge crossing. Every day hundreds of tourists stand there not to miss this classic photo. You probably can’t help but do the same. Also an interesting motif to edit with Photoshop!

The legend of the kiss of love under the bridge

Let’s move on to the pinnacle of romance. Couples hoping for eternal love should kiss as they pass through the Bridge of Sighs on a Venetian gondola at sunset. Legend has it that two lovers will then stay together forever. The outcome is not certain, but it should definitely be worth a try. While travelling on the canal under the bridge, you can enjoy the baroque splendour.

So wait for sunset, hire one of the many private gondolas in front of the Piazzetta for a chunk of money and give the gondolier appropriate instructions. The same applies to crossing under the Rialto Bridge, probably the most famous bridge in Venice.

Security risk almost exclusively means pickpocketing, for example in the crowds on the Ponte della Paglia, with the best view of the Bridge of Sighs. There is extensive advice on this in my article Safety in Venice and in my description of nearby St Mark’s Square.

For people with reduced mobility, there are ramps at the Ponte della Paglia. The Doge’s Palace is also accessible without hindrance except for the secret passageways, the prison cells and the armoury.

Nearby toilets, including WC for disabled visitors, are available at the Doge’s Palace for ticket holders. Otherwise, as listed in my previously mentioned St Mark’s Square article.

The souvenir shop near the bridge 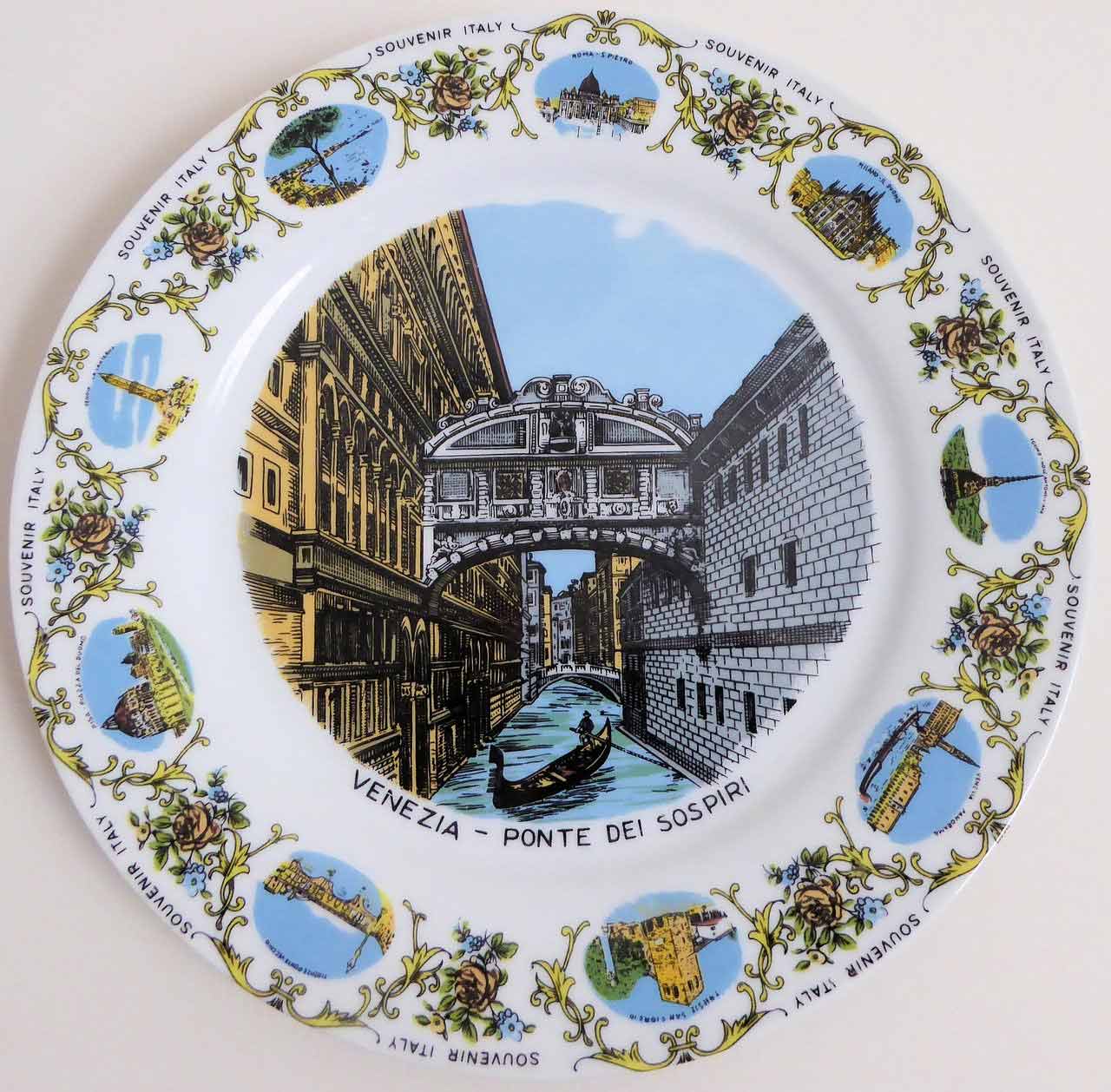 No one needs to do without their fridge magnet or the plate with the gondola that passes under the Bridge of Sighs, even if the offer in the vicinity of the Bridge of Sighs is rather limited, for example by kiosks or flying traders. But don’t worry, there are plenty of souvenir shops in the lagoon city…

Location and approach to the Bridge

La Ponte dei Sospiri is considered one of the most beautiful Venetian bridges of the Baroque period. It is only a few steps away from St Mark’s Square. It is the world-famous centre and the biggest crowd puller in Venice. The spacious Piazza San Marco, the mosaics and domes of the Basilica and the soaring silhouette of the Campanile are known all over the world.

The Bridge of Sighs is one of the most important sights in the centre of Venice. It impresses with its closed architecture as well as with its importance as a direct route from the Sala della Quarantia Criminal to the dungeons of La Serenissima. If you travel by vaporetti, i.e. water buses, the stop is thus San Marco.

Why is it worth visiting the bridge? 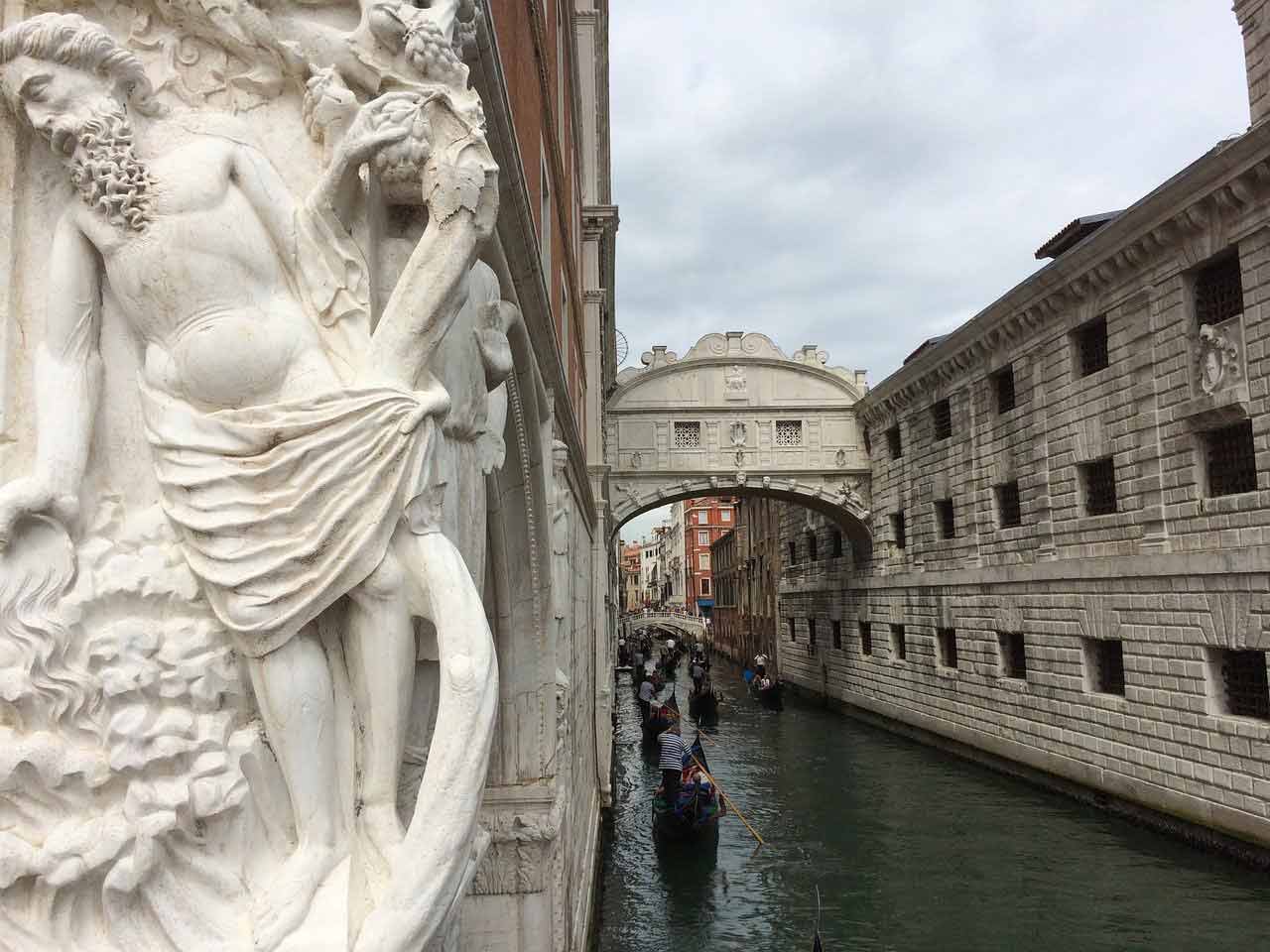 While most of Venice’s Renaissance buildings with their thick walls are more like fortresses, the Palazzo Ducale with its Gothic columns seems light and airy at first. A tour of the Doge’s Palace is probably on every visitor’s itinerary, although towards the end of the guided tours you might feel an oppressive but also quite pleasant shudder: The palace’s dungeons and execution sites tell of a darker side of Venetian power. A famous centuries-old baroque bridge serves as a link: Ponte dei Sospiri, the Bridge of Sighs.